On my other blog about creating a day clock for dementia using a digital photo frame, there have been quite a few comments regarding day clocks for people living with dementia. I’d therefore like to take the opportunity to review some of the various types of day clocks available.

The concept of the day clock is nothing new. Long case clocks (grandfather clocks) have had sun and moon phases for quite some time, and the basis of a day clock is exactly that. 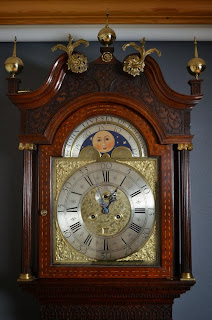 Before we had clocks, we had sundials, from a basic stick or stone in the ground, to the more complex gnomon based variety. These would give a fairly accurate indication of the time of day, whilst the sun was visible – morning, afternoon and evening. Night was quite naturally the absence of the sun altogether. 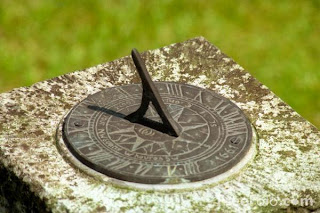 Thus the entire concept of the day clock can be traced back to when man first pushed a stick into the ground, and started to measure the time of day, from the shadows cast by the sun. 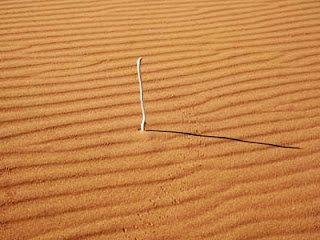 With the likes of Stonehenge, the whole concept took on a completely different purpose, but it would still measure time. 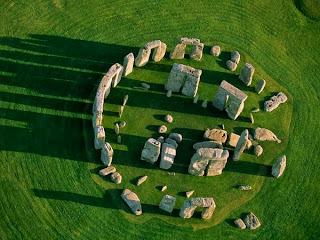 Night and day is quite easy to define (unless you are located nearer to the North or South poles, and within the Arctic or Antarctic circles), although each part of the day lengthens or shortens, depending upon the time of the year.

We are all used to the concept of day and night, and have been for millions of years. Yet, within our modern world, with electric lighting, we can extend or shorten these periods to suit our needs. For someone living with dementia, this can cause problems.

Therefore another way of indicating the time and period of the day, may, and I reiterate the word MAY, be helpful.

There are a number of day clocks aimed at people living with dementia, including my own free version for use with digital photo frames. The principle is similar in all cases.

There are analogue versions, some of which are essentially a modern version of the long case clock, showing night and day phases. These are easily recognisable, but their usefulness is questionable, especially as the clock face, unless illuminated, is not visible at night. 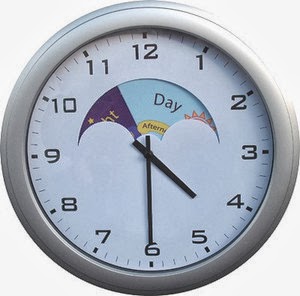 Other analogue versions have only one hand, and rotate on a weekly basis, showing the day of the week, and the day subdivided, in most cases, into day and night. The problem with these is that they have to be “learned”, they don’t follow the basics of a normal analogue clock. Again their usefulness is questionable. 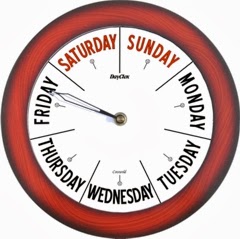 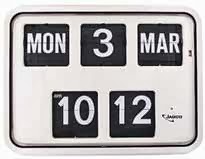 There are also true digital versions of the same clocks, either with an LED or LCD display, yet again, these are standard clocks remarketed to try to enter the “dementia” market. 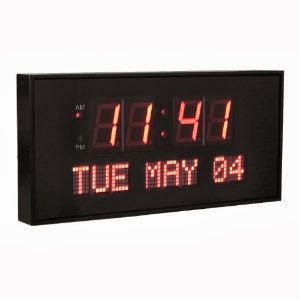 The first I will mention is that developed by BIME. Essentially, like my version, it is based upon a digital photo frame, in this case adapted to be used specifically as a dementia day clock. The display is basic, with a simple text message such as “Now it’s Tuesday Afternoon”, in white on a black background. BIME claims that “Now it’s” proved to be the best understood message. 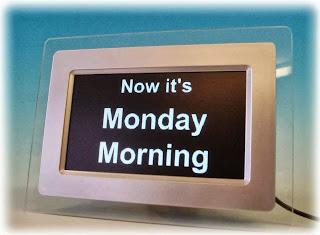 Feedback from my own blog, would tend to indicate that “Now it’s” or as in my version “It is now” are actually superfluous, so I will be producing a simpler set of files in the very near future.

Another clock, somewhat dubiously marketed as a clock suitable for people living with dementia (DayClox), is in essence a standard digital clock, based upon a digital photo frame, and providing no further information than that found on any other standard digital or indeed analogue clock. 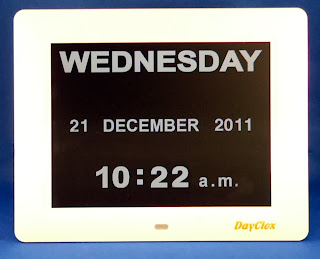 Finally, there are two further versions. My own, and that of Zeezap. Both use text and images to indicate the period of the day. My own uses, and earlier versions of Zeezap used, real images to portray the period of the day. Zeezap however, has now moved to simplistic, almost nursery type images, spoiled by the overuse of Photoshop effects in order to get the message across. 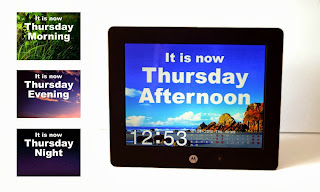 I’m trying not to be overcritical of Zeezap, in favour of my own system, however, the use of all upper case letters decreases legibility of the message, especially for older people with visual impairment. 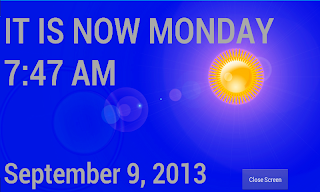 As a graphic designer, I’m only too aware of the importance of the use of upper and lower case lettering when it comes to legibility, and would refer to the designs of Jock Kinneir and Margaret Calvert for British motorway signs, where legibility at high speed was important. They used upper and lower case, a standard which, including the typeface, has since been adopted in many parts of the world. 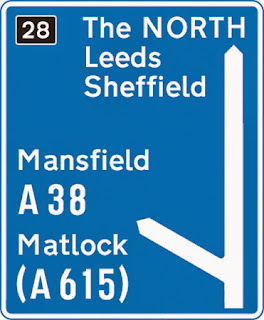 Many claims have been made regarding day clocks for people living with dementia, and many of those clocks marketed as such can prove to be an expensive waste of time. My own version works for my Mother, and may indeed work for others.
If you are a carer/caregiver for someone living with dementia, then try one of these clocks by all means. It may well prove helpful, especially where there are cases of sun-downing. I would however recommend that a certain amount of experimentation is carried out first, especially before spending money on something that may prove to be totally useless. Not one person living with dementia is the same as another, however, the companies marketing these devices would have you believe otherwise.
Posted by Martyn at 16:04