It is already a well understood fact, that music helps those living with dementia. The brain and the parts of the brain involved, respond to music in a different way from normal conversation. Someone with dementia may have difficulty communicating, and expressing themselves using words, but music, can have a very dramatic effect. A different part of the brain is involved when listening to, and singing along with, music. Words that may have been forgotten in conversation re-appear, when singing. Lyrics to songs, are stored somewhere else.

Lyrics are in the form of a structured word pattern - just like poetry, which can also work. Such word patterns are stored in a different part of the brain from words used in conversation.

Music can have a calming effect - it can also be exciting, resulting in animated responses, smiles and even laughter.

Music can be used, very successfully, as a stimulus for those with dementia. It can trigger memories from the past. It can also stimulate other parts of the brain to help them remember.

Mum loves listening to music, especially music from her past. However, she also loves more recent recordings, such as Andre Rieu concerts, yet these also hark back to her past. Listening to, and watching such concerts, brings great pleasure and happiness. She becomes much more animated, singing along, clapping and “conducting”. 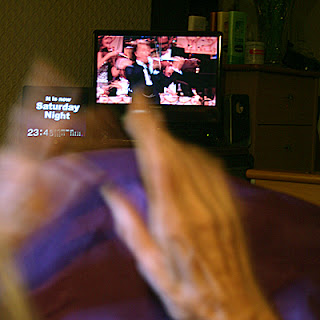 Notably, these concerts are watched, when broadcast on TV, or when there’s nothing else to watch - on DVD, on a very regular basis.

Music is a therapy in itself.


Emotions, triggered by objects or events, including listening to music, can have a similar effect. When Mum is angry, she can be incredibly lucid, using words that she wouldn’t normally use, and may not be able to recall at other times. Her anger can  be triggered by something on TV, she’ll start shouting at it, or more accurately, at the people on TV who triggered her anger in the first place.

Like the recall of song lyrics, emotions are controlled by a different part of the brain, a part that may not be as badly affected by Alzheimer’s or dementia. This may trigger memories of past events or reactions, and help them recall words, which under other circumstances appear lost forever.

Sometimes, if I get upset, Mum’s nurturing instinct comes to the fore, and once again she becomes more lucid, more caring, and more concerned.

Far too often, negative emotions are ignored, not in a caring sense, but in finding a way to promote a more positive, happier, response. If someone with dementia is upset, a gentle hug and talking may help to some extent, but what else can be done to help them?

With many forms of dementia, logic seems to go first, but emotions remain for a far greater length of time. Dementia is, in many ways, a regressive condition. Those with it regress to a more “childlike” state, yet they are not children. They are adults! Adults who should be respected as such.

However, there are many products designed for children, that can prove useful and helpful to those with dementia. The fact that many toys are brightly coloured helps. As we get older, our eyesight diminishes, and colour perception is reduced, bright and contrasting colours help to alleviate the effects of this deterioration. No one person is the same, and this is equally true of those with dementia, so experimentation is necessary.

I’ve tried numerous different toys and products with Mum, from colouring books to building blocks, from cuddly toys to dolls. As highlighted in an earlier post, a realistic baby doll has worked best for her.

Whatever works with the person concerned, the item or event can bring an almost immediate change in emotion, and attentiveness. An otherwise silent and non-interactive person may start to react to others, start talking, and become more animated. Their mood can change almost instantly.

Emotion, whether happy or sad, can be triggered by a variety of events and objects. Those of us who care for someone with dementia always strive to try to keep them feeling happy, loved and safe. Through experimentation, we can discover what makes them happy, and how to maintain positive emotional responses. Any form of stimulus, visual, aural, tactile or smell, that triggers a positive response can only be good.

Music is just one of the many stimuli we can use. For a large number of people with dementia, it appears to work. Knowing the genre and period of music they like, is an invaluable resource when trying to maintain a level of mental alertness and a positive emotional state.

Music calms, music comforts, music excites - music is an invaluable stimulus for those living with dementia.
Posted by Martyn at 14:45