Dementia – put an end to the stigma through words, phrases and images

Now that the first G8 Dementia Summit has come to an end, I decided to take a look at one of the 12 points in the declaration, namely point 11:

Call upon civil society to continue and to enhance global efforts to reduce stigma, exclusion and fear.

It was unfortunate, that in his summing up at the end of the summit, Secretary of State for Health, Jeremy Hunt, used the term, “the scourge of dementia”. Hardly helpful in reducing stigma or indeed fear. That the Prime Minister, David Cameron, referred to those living with dementia as “sufferers” was also unhelpful.

I have also seen other words such as epidemic and plague, being used to describe the increasing number of people developing dementia. And another, referring to dementia as the NHS time bomb! None of these words and phrases will help reduce stigma, allay fears or avoid exclusion.

Post summit, there is now the opportunity for politicians and the media to reconsider the vocabulary they use when referring to dementia. To find and use alternatives instead of the scaremongering, discriminatory and exclusive words and phrases highlighted above.

It is an unquestionable fact, that there is suffering at times for a person with dementia. However, suffering is only one aspect of the condition, there are also times of joy, laughter and smiles. In many circles it is now accepted that it is better to use the term “living with dementia” (as used by the BBC today, December 12 2013, in a news report about the summit), rather than “dementia sufferers”.

Unfortunately the BBC, on its website, also published the following statement ‘Dementia is described as a "global disaster waiting to happen" and the biggest health and care problem of a generation.’

Whilst this is undoubtedly true, such a statement is unhelpful. That dementia is a global issue goes without saying, but it is not yet, and should not be described as, a disaster. That dementia is currently and will continue to be a “problem” for some time, is also true – but it would be better described as a challenge, rather than a problem, in light of the summit, that is what it is, and the G8 nations must rise to that challenge.

We need to look to the future, a future that will hopefully be brighter for those who are yet to develop dementia. We need to be positive, we need to think, talk, act and write positively. We need to change the vocabulary used when referring to dementia.

Where possible, we should perhaps try to avoid the word disease - to many this sounds “infectious” - dementia is not a transmittable condition. Generally, we now refer to Alzheimer’s disease, as simply Alzheimer’s.

All forms of dementia are terrible, and at the moment and for the foreseeable future, incurable. Just as many forms of cancer were, until quite recently. 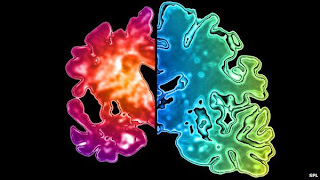 The above image was accompanied by the following caption:
Loss of tissue in a demented brain compared with a healthy one

Here we have two problems, the image of a “shrunken” brain is frightening enough, and although a true depiction of what can happen, the use of the word “demented” is unforgivable! Yes, demented, using its secondary definition can mean “affected by dementia”, but its primary definition - the one understood by most people - is “mad or insane”! We need to approach these matters in layman’s terms, and not terms that might be used by medical professionals.

For far too long, images used to portray those living with dementia, often show a person in the latter stages of the condition. Yet this stereotypical image does not fully portray the true facts, and indeed induces fear about dementia, and promotes stigma and exclusion. Whilst we must never hide the true facts about dementia, there are many stages, and these also need to be portrayed in order to illustrate - that at least for a while - it is possible to live well with dementia.

All too often, these images are of older people, completely ignoring the fact that dementia is not confined to them, nor is it part of the ageing process. Early onset dementia can affect younger people too. 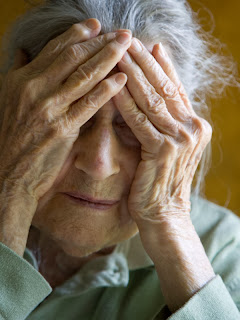 One of my pet hates where images are used to portray dementia, is this: 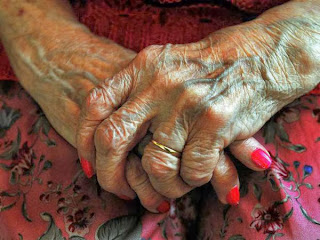 Why? Because it gives the impression that every older person, must have dementia – which is most definitely not true!

The following images, taken by me, are neither stereotypical, nor frightening, even though they do portray an older person. They are happy images, images of someone living well with dementia - my Mum... 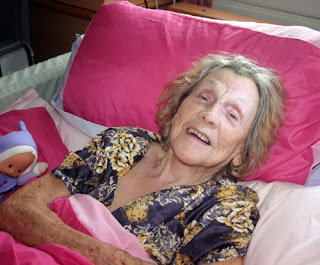 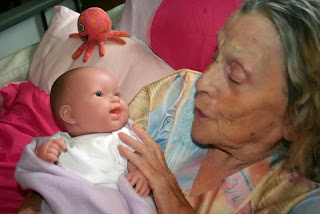