I’ve already touched on the importance of music for people living with dementia elsewhere on my blog, but I now want to introduce something a little more interactive. Something, that can be used both at home, and, in day care centres and care homes for people with dementia.

Most computers - desk-top, laptop, tablet, and even smart-phones - are now very well capable of playing music. They can play mp3 files, and .wav files, but many can also play .mid or MIDI files. 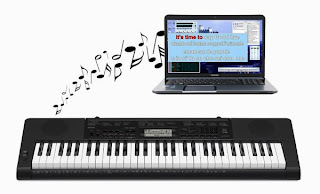 MIDI stands for Musical Information Digital Interface. MIDI files are generally quite small - just a few kilobytes - this is because they are simply machine/computer code telling the MIDI software or hardware, which notes to play, which instruments to play, and for how long – essentially a computer language version of sheet music.

Windows Media Player is perfectly capable of playing MIDI files, unfortunately the GM (General MIDI) instruments included with Windows leaves a lot to be desired. Depending on the version of Windows you are using, this can be improved, as I will explain later. Apple Macs and iPads can also play MIDI files, and generally have a better set of GM instruments. Many Android tablets and smart-phones can also play MIDI files – quite a few ring tones are in MIDI format.

The first issue with MIDI files is that they are purely instrumental music, there are no vocals. However, there are many MIDI files that have a karaoke style word notation contained within the data. These files are playable using a MIDI/karaoke player, one of which is freely available at VanBasco http://www.vanbasco.com/.

VanBasco also has a search engine to help you find the MIDI/karaoke songs you want, and trust me, there are thousands! http://www.vanbasco.com/midisearch.html 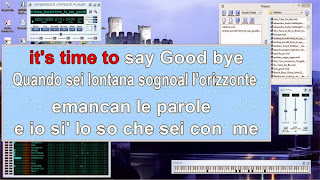 Going off at a slight tangent, Mum loves watching and listening to Andre Rieu concerts - using MIDI files and a MIDI capable Casio keyboard, I can effectively reproduce much of the music from those concerts, simply by downloading MIDI files and using a MIDI player or sequencer on my laptop.
I’m currently researching suitable apps for Android tablets, and will update later.

OK, let’s look at what is needed:

Little more than a laptop capable of playing .mid (MIDI) files, with, maybe, some external speakers and (in the case of Windows) an improved GM instrument set. Launch VanBasco, select songs for the playlist (after downloading the files of course), and off you go! Result: favourite songs - complete with words, karaoke style - to sing along with. 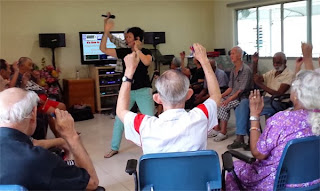 For larger groups - such as day care centres and care homes - this can easily be adapted using HDMI. Many laptops and tablets have an HDMI output, enabling them to be connected to an HDMI capable TV or, for even larger groups, projector - external speakers or a PA system may also be required.

Frankly, the possibilities are endless, it just takes a little imagination.

Versions of Windows, prior to Windows 8, included an application called MIDI Mapper. This enabled users to download other sets of MIDI instruments, and use them instead of the “built-in” instruments. These are easily selectable from within VanBasco.

With Windows 8, MIDI Mapper disappeared, there is however a work-around, Coolsoft's Virtual MIDI synth http://coolsoft.altervista.org/en/virtualmidisynth. You'll also need to download a SoundFont, I used SGM-V2.01 from http://www.geocities.jp/shansoundfont/.

Another Windows 8 work-around is to have a USB/MIDI capable external device, such as - in my case - a Casio keyboard. This has 400 sounds, all accessible through MIDI, including GM instruments. After first plugging in, and waiting for driver installation, the keyboard can be selected as the MIDI output device, and all MIDI files are played through the keyboard’s speakers, external speakers or a PA system connected to the keyboard. The possibilities here are numerous, as there are many USB/MIDI devices available, and, at other times, such an electronic musical device, can also be used as a keyboard – to play piano, organ etc. - independently of any computer (most of these devices default to standard grand-piano mode when switched on).

The easiest way to search for the songs you require is to type in the title of the song along with the word “MIDI” – Google, for example, will then bring up various sources for that song in MIDI format. When searching for files carrying karaoke data, the VanBasco search engine is the best bet.
You will often find that these MIDI/Karaoke files have an additional melody track – this plays the melody to which the words are sung. Sometimes, this melody track can be over-intrusive – fortunately VanBasco provides the capability to mute this track – it is normally the first instrument listed.

As is often the case, experimentation is essential. Many of the freely available MIDI/Karaoke tracks have been compiled by budding amateur musicians, and whilst many are very good, some are not. But, with little more than a computer, some easily downloadable free software, and thousands of freely available MIDI tracks, it is a very easy and incredibly inexpensive way, to create a vast library of interactive music, for everyone to enjoy!

I’ve listed a few resources below to help you get started – happy searching, and hopefully, happy singing!

Some sources for free MIDI files - some with lyrics - there are many, many more...

http://www.vanbasco.com/karaokeplayer/
Posted by Martyn at 09:13